Shenzhen is a coastal city located in Guangdong province in south-eastern China, just across the border from Hong Kong. The capital of Guangdong province is the city of Guangzhou, which was known for a period as Canton. Shenzhen has an extensive coastal plain with a backdrop of rugged forested mountains. There are six districts in Shenzhen: Futian, Luohu, Nanshan, Bao’an, Yantian and Longgang. The districts of Futian, Luohu and Nanshan together make up the majority of the central Shenzhen area which directly adjoins Hong Kong. The city centre is in Futian district. 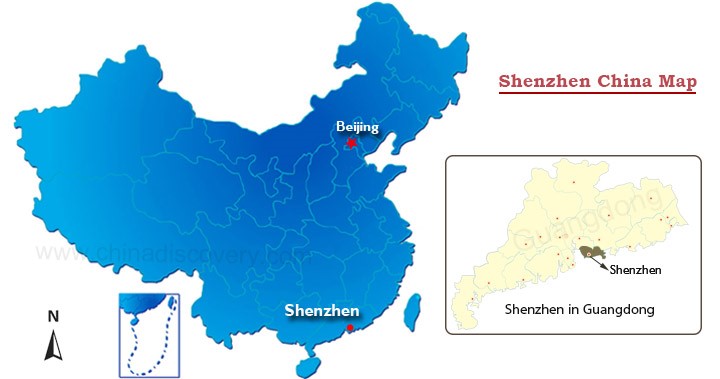 Shenzhen has a subtropical climate with a long hot and humid summer from April to September. Temperatures rise to 30-35°C (86-95°F) in June-July at the peak of summer, sometimes higher. The nights are also warm to hot with temperatures of 25-30°C (77-86°F). Summer is also the wet season, when most rain is experienced, and typhoons are also possible. The temperature range in February, which is mid-winter, is from about 20°C (70°F) in the day to 10°C (50°F) at night.

Mandarin, the official language of China, is spoken in Shenzhen. Mandarin is known in known in China as ‘Putonghua’. Because of Shenzhen’s close proximity to Hong Kong and Guangzhou, you will also hear the Cantonese language spoken. Many people in Shenzhen can also speak some English as the city has become globally. Many road signs and tourist maps and brochures feature both Chinese and English information, and announcements and displays on the Shenzhen Metro are also in both Chinese and English.

Get to Shenzhen By Air: There is one airport in Shenzhen - Shenzhen Baoan International Airport (IATA: SZX), which is one of the 4 largest airports in China. It has around 190 air routes to more than 110 domestic cities, including Beijing, Shanghai, Hong Kong, Xian, Chengdu, Chongqing, Hangzhou, Wuhan, Kunming, Guiyang, Zhangjiajie, Lanzhou, Sanya, Zhengzhou, Harbin, Macau, Taipei, etc. and about 30 international cities, including Los Angeles, Auckland, Sidney, Milan, Frankfort, Singapore, Tokyo, Seoul, etc. Situated in Baoan District, this airport needs about 1 hour to get to city downtown by driving about 45 kilometers. Besides, local Metro Line 1, airport bus, taxi, etc. are available.
By Bullet Train: Shenzhen has convenient network of high-speed trains which connect many destinations in China, with the nice services of the four high speed train stations, including the more frequently used Shenzhen North Station and Futian Station. Travelers can take a cool bullet train from Beijing (8.5-10.5 hours), Shanghai (11.5 hours), Guangzhou (0.5-1.5 hours), Guilin (3-3.5 hours), Yangshuo (2.5-3 hours), Xiamen (3.5 hours), Wuhan (4-5 hours), Changsha (3-3.5 hours), Xian (9.5-10 hours), etc. to Shenzhen with speed and comfort. Moreover, after the operation of Guangzhou-Shenzhen-Hong Kong High Speed Rail Link, visitors can also start from Hong Kong West Kowloon Station to get to Shenzhen within 20 minutes.
By Coach: There are 57 long distance bus stations in the various districts in Shenzhen, and the most used are Luohu Bus Station, Futian Bus Station, Huanggang Bus Station, Nanshan Bus Station, Yantian Bus Station and Baoan Bus Station. There are many daily coaches to other cities in whole Guangdong Province (including Guangzhou), Hong Kong, Macau, and many cities in other provinces including Hunan, Hubei, Fujian, Hainan, Guangxi, etc. Most coaches are high speed and depart every 15-40 minutes.
By Ferry: Visitors can also take a ferry to Shenzhen from Hong Kong, Hong Kong International Airport, Macau, and Zhuhai. The more frequently used ports are Shekou Port and Fuyong Port.